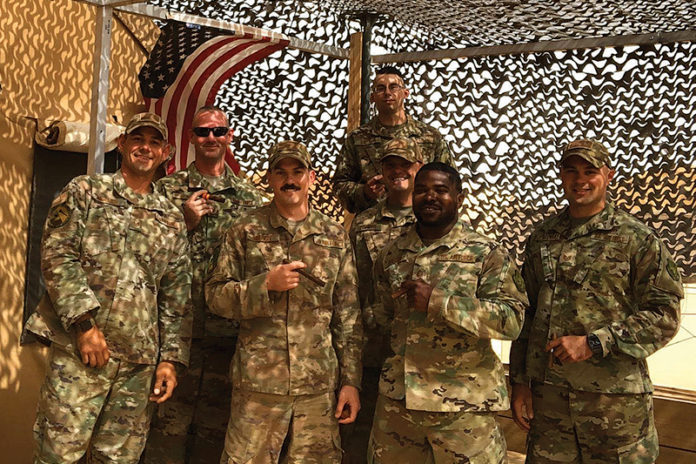 Every day, I get asked how the COVID-19 virus is affecting the nonprofit organization Operation: Cigars for Warriors (CFW). Like you, CFW has also been greatly affected. There are, of course, the obvious negatives—a lot of them—but, surprisingly, there have been a few positives. Saying there have been a few positives does not mean we have any love for the virus at all; it just means that we have to do our best and make the best out of the worst of situations.

As you can imagine, our donations have greatly dropped off compared to what we typically receive during the months of March through June. These months are typically the charity’s biggest months for donations, mainly because of all the great festivals and major events that support CFW. Yet the requests from our valuable troops have not dropped off—if anything, they have grown.

Another area where CFW is hurting is in our donation center program. Our primary donation centers are cigar retail shops. This global disaster has greatly affected all of our retailers throughout the country. Some have been allowed to remain open but usually with a drive-up service only. As you can imagine, there are not a lot of donations being dropped off right now. In normal times, many of our donation centers host events once a month, and CFW can collect even more donations during them. Sadly, the shops probably will not hold any cigar events for a while, at least in the majority of states.

We are also lacking in volunteers. We have had some get sick or have their family members getting sick—and we have even lost one of our own. Matt Hull was a huge loss, not only to CFW but to everyone that he came into contact with. Matt was one of those rare people who had not one area of expertise but multiple areas of expertise. Even rarer for someone with his talents and intelligence was that he also had a very high EQ (emotional quotient or emotional intelligence)—which basically means that he was a very personable person who everyone gravitated toward. He will be sorely missed by all.

Whether healthy or not, our event coordinators have not been able to do their normal jobs. Even if they were to just make calls from home, most of the locations they would call upon would not be open or have anything for them to do. Knowing the quality of volunteers we have, I have no doubt that they would love to assist these great retail stores in any way possible, but sadly they are very limited as far as what they can do.

With all the negatives that the COVID-19 virus has afflicted on CFW, there have also been some positives. Our past senior vice chairman, Justin Tronsco, stepped down after eight years of being with the charity, the last five years of which he served as senior vice chairman. He was good enough to give us a six-month heads-up that he would leave CFW. Justin’s job and family life were beginning to take up even greater time than in the past, and this is very normal for many volunteers for any charity organization. While this seems to be a negative.—and it was, as he was a valuable part of the team—the timing of the virus gave us that valuable time to transition to a new senior vice chairman. CFW is blessed that Trey Boring has graciously agreed to become our new senior vice chairman. Justin and Trey were able to conduct a very smooth transition that just would not have been nearly as effective if it were not for the pandemic.

Additionally, the timeline of COVID-19 gave the Internal Operations Committee (IOC) the valuable time it needed to improve its organization. The IOC is our largest committee by far, and it is the most critical to the continued success of CFW. CFW has always been known for its flexibility, and now, because of the IOC, this attribute has been greatly improved. The problem has been that it is a fairly new committee, with new members who have new areas of responsibility. That is where the positive side of the virus has come into play. It has given the board of directors a chance to solidify the committee, time to fix a lot of the holes, and the chance to test certain standard operating procedures and adjust fire accordingly.

Most people do not understand that since the inception of CFW, the organization has gone from what the original founders thought would be a hobby that required three to five hours of work a month to a charity that requires more than half of the founders to work 30 hours or more every week­—almost overnight. Most of them thought that this extreme amount of work would dissipate over time, but instead, the demands became greater. As Ben Edmundson, our original treasurer, once said, “These last four years [have] been like drinking water out of a fire hose.”

The charity’s infrastructure has also grown significantly over the years—sometimes faster than the critical paperwork could be done or proper training could be conducted. As many volunteers can attest, there have been periods of time for the charity when everyone was doing so much that a new volunteer was thrown into the mix without all of the knowledge they needed. Over the years, we have greatly improved that disservice to our staff, and in the last two and a half years, with the addition to the yearly workshop, the infrastructure and all that entails has greatly improved. Now, because of this COVID-19 disaster, it has given the leaders of the charity the critical time they have needed for years to fill in or fix the holes that the charity has had.

Many in the public that support CFW really have no clue of the depth of what CFW is. We are slowly improving in all those areas that are not so fun—like the creation of better bylaws and standard operating procedures—that are so critical for the future success of the charity. Because many of our volunteers are on furlough or working from home, we have been able to move forward at a greater speed in some of these tortuous areas.

There are other positives that this disaster has given the charity—especially in the areas of our creative projects that are occurring now or will occur in the future. Many of our big podcast supporters, like the .“Bakersfield Gentlemen,” are doing unique fundraiser programs that CFW benefits from. Our social media department has started a new campaign called “Quarantine Clean-Up,” where they ask the public to go and clean out their humidors for the benefit of our troops. Our supporters cleaned their humidors big time, and CFW greatly benefitted. The CFW marketing department got on board with the Giving Tuesday campaign, and we put out a plea to our supporters to give extra support, and they did tremendously! Several online stores did specials that CFW benefited greatly from. A unique example of this was Smoke Inn’s “Pay it Forward” 48-hour deal. If you bought $100 or more, Smoke Inn would forward a $50 gift certificate to someone of your choosing. Many people chose CFW to receive the certificate!

There are also several cigar manufacturers, like Hiram and Solomon, Illusione Cigars, and Caldwell Cigars, whose teams are working on some very neat cigar collaborations with CFW. These are just three examples of upcoming projects that have been in the works for half a year. During this time of the COVID-19 pandemic, we have been able to get many parts of some of these projects off the ground that would normally have taken double the amount of time or more.

People have also asked me, “Do you have that many requests coming in from the troops since the pandemic started?” The answer to that is an emphatic “yes.” In fact, we have an even higher number of requests coming in from our deployed men and women servicemembers. As one soldier put it, “The suicide bomber didn’t get furloughed because of a virus he was afraid of getting.” The troops are under even more pressure, as hard as that is to believe, because of this pandemic. They still have to do their jobs while adding a ton of health precaution standards, which has made their jobs so much harder and has added an inordinate amount of stress to our troops.

Remember what an army doctor stated years ago, “For our men and women who are smoking a cigar while deployed, the mental health benefits outweigh any potential health risks.” Another anecdote that we have received in many forms over the years basically states, “Smoking a cigar after a bad day in a war zone is the first line of defense against post-traumatic stress disorder.” When you’re upset that you have to go curbside to get your cigars or wait in line for your coffee, think of our troops.

Stay healthy, and remember to thank your essential workers, first responders, and, of course, our amazing military! In many cases, our military personnel is performing the roles of our essential workers, our first responders, medical teams, and working as our protectors. Grab a cigar, box it up, and mail it to CFW’s headquarters at 8585 S.W. Hwy. 200, Unit #16, Ocala, FL 34481. Every donation counts!

HOW TO REMOVE CIGAR SMELL